Von Alumni für Alumni: A Visit to the GFZ German Research Centre for Geosciences on the Telegrafenberg in Potsdam 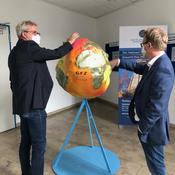 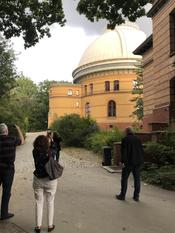 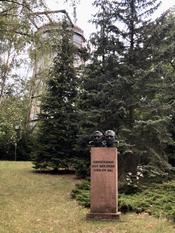 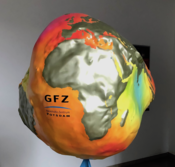 How did the Telegrafenberg get its name? What is the “Potsdam Potato”? Why is “Freundlich” the moniker of the local café? And how does Albert Einstein enter into the equation?

These and many more questions were the subject of a tour held by Dr. Alexander Rudloff – alumnus of Freie Universität and member of the Scientific Executive Board at GFZ German Research Center for Geosciences – as part of the second-ever Von Alumni für Alumni (For Alumni, By Alumni) networking event on August 27, 2020. 25 Freie Universität alumni were treated to a look behind the scenes at the GFZ and learned about the Albert Einstein Science Park’s 140-year history during the exclusive tour.

The Alfred Wegener Institute (AWI), Potsdam Institute for Climate Impact Research (PIK), Leibniz Institute for Astrophysics Potsdam (AIP), and Germany’s National Meteorological Service (DWD) are all located on the Telegrafenberg alongside the GFZ. Its name – which literally means “Telegraph Mountain” – harks back to the fourth station in an optical telegraph line built in 1832, which later went out of use when the electrical telegraph was introduced. All that’s left of the system today is a replica. The site’s connection to Albert Einstein isn’t hard to figure out, either.  Funnily enough, he never ended up working on the Telegrafenberg site, even though the entire site bears his name. He was, however, involved in the development of the Einstein Tower. Together with the architect Erich Mendelssohn and the astronomer Erwin Finlay Freundlich (who is the café’s namesake), he designed what was the most important solar telescope in Europe until the Second World War. This ushered in a new era of solar research in Germany back in 1924. All that’s left now is to figure out what the Potsdam Potato is! One of the GFZ’s key tasks is to determine the specifics of the Earth’s irregular shape, known among experts as the “geoid.” The GFZ is home to a model that depicts mass distribution on the Earth’s surface and the Earth’s uneven gravity field, which is fondly referred to as the “Potsdam Gravity Potato” due to its exaggerated, knobby shape.

To round off the tour, Dr. Rudloff invited the participants to Café Freundlich, where the evening drew to a close as the group shared memories of their time at Freie Universität over finger food – in other words, the ideal networking opportunity.

The Alumni Team wishes to thank Dr. Rudloff for inviting them to his place of work and looks forward to future Alumni Network meetups in this event series.