As students from different countries were mixed together to represent one country together at GMUN, our delegation which represented the Republic of the Marshall Islands consisted of four students which came from Uzbekistan, Egypt and Nigeria.

The fact that we did not meet before the conference, as it is not usual for the preparation for other MUNs, increased the challenging task of coordination among the delegation members. But nevertheless, we managed quite well to communicate via E-Mail, so that we discussed our country’s foreign policy beforehand.

During the first sessions, we had the opportunity, to state our country’s position in a 3 minutes opening speech. We took that opportunity to state our policy towards the issue: we welcome UNRWAs great contributions during the lat 60 years to improve the refugees’ situation. Nevertheless we regret that there remains so much suffering that hinders to achieve the MDGs by 2015. We encourage developed countries to make more financial contributions to improve education and health of the refugees. Furthermore, we stressed that the Marshall Islands is a peaceful nation without a standing army and therefore favours to resolve conflicts by multilateral cooperation and dialogue.

Our alliance was mainly with United States, Australia, New Zealand and other Pacific Islands.We also cooperated with Israel, as it was one of the very first nations to recognize the Marshall Islands as an independent nation in the 80’s, long before we were a member in the UN in 1991. That is a point of friendship that remains until today.

During informal consultations, we approached our foreign policy partners and discussed our ideas. Soon, it was clear that we would have trouble to find common grounds with other countries present at the conference. Especially when it came to define a Palestinian refugee, we did not manage to bring Israels and Palestines ideas together.

At the last day of the conference, our committee discussed the resolution drafted by Palestine and others. After long discussions and lots of amendments we finally voted the resolution by a role-call-vote.

As it became apparent during the previous discussions, many countries did not feel comfortable with the outcome. It was criticised that the Resolution directly called upon Israel to change its behaviour in certain ways and comply with international conventions, just like at the real UN. Thus, many countries abstained the vote or even voted against the resolution. 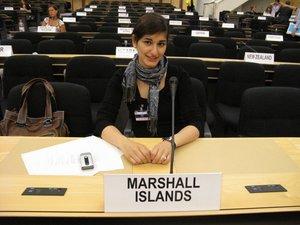