+++ Event Notice +++
The Alumni Campus Tour on Sept 17, 2021, is booked out. The next tour is scheduled for spring 2022. Please register with the Alumni Network if you want to receive an invitation via email.More information will follow soon.

Are you curious what has changed at Freie Universität or do you simply want to return to Dahlem to reminisce? Have you always wanted to see behind the curtain and discover areas of the university you did not see during your time at Freie Universität? Several times a year, the Alumni Network offers tours of the campus and university buildings.

The tour takes visitors through the historic Henry Ford Building, the Executive Office Building with the Golden Hall, to the famous Philological Library by Lord Norman Foster, and to the "Holzlaube", the newest building on campus for the so-called Small Departments.

Campus tours are usually offered during the spring and fall. Registered alumni are informed via e-mail about upcoming events. Due to the high number of registrations guest and waiting lists are kept.

Every year, the Alumni Office issues an invitation to former members of Freie Universität Berlin to join them for a tour of the Dahlem campus. In light of the pandemic situation, the tour was adapted to include more outside stops. However, the weather kept its promise, and so on a late summer afternoon our alumni strolled along historical tracks - from the German empire to modern times. 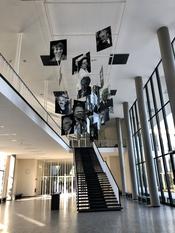 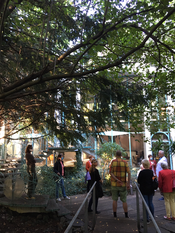 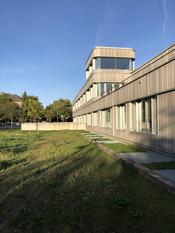 The tour started at the Harnack House, where tour guide Stefanie Hardick explained the significance of the building and its history before moving on to Boltzmannstrasse. Number 3 Boltzmannstrasse was once the site of the Kaiser Wilhelm Institute for Biology, but in 1948, it saw the dawn of a new era. With the support of the US Allies, politicians, and the general population of West Berlin, it became Freie Universität Berlin’s first home.

The tour then moved on to the Henry Ford Building, constructed between 1952 and 1954 with funding from the Ford Foundation. With the help of original recordings, the guide took the participants back to 1963 and John F. Kennedy’s famous Berlin speech held before a 20,000-strong audience. The group then took a seat in the AudiMax auditorium where they found out more about the 1960s and 1970s at Freie Universität, the student movement, and political activist Rudi Dutschke.

On the way to the university’s central buildings (the “Rostlaube” and “Silberlaube” on Habelschwerdter Allee), the particpants found out all sorts of exciting facts, including the history of Germany’s first ever vegetarian student cafeteria, news on the “Blooming Campus” initiative, and an account of the university’s first semester during the pandemic – which was dubbed the “Creative Semester” by Freie Universität’s president, Günter M. Ziegler. But perhaps the most surprising stop on the tour was the fairytale garden at the Institute of Philosophy, a green oasis at the heart of the university campus. Equally impressive was the modern Philological Library, designed by Sir Norman Foster.

Taking a route past the AStA and central cafeteria, the tour finished up at the university’s newest building, the “Holzlaube,” or “wooden cabin.” The new site is home to the smaller departments and is guarded fiercely by the university’s wooden coyote, Trickster, an icon of freedom who symbolizes the importance of interdisciplinary exchange.