The Emergence of Impartiality: Towards a Prehistory of Objectivity 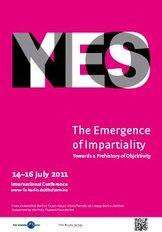 From the early seventeenth century onwards, the epithet 'impartial' appears ubiquitously in publications from different disciplines, figuring in the titles of works of history, economy, law, and philosophy, as well as histories of the church and of emerging nation states. The objective of the conference was to map out the contexts in which impartiality emerged as a key tenet of learned practices during the seventeenth and eighteenth centuries, and to describe the implications of the changing self-descriptions of different cultures of knowledge. Papers traced the notion of impartiality in various discourses, and thus contributed to a deeper understanding of the emergence and development of this ‘travelling concept’, the routes it took, and the role played by various discursive fields in shaping it. A particular focus of attention was the relationship of impartiality to the modern notion of objectivity.

The conference was generously supported by

and organized in collaboration with

You will find the Conference schedule here.