Research under Pressure – Responses and Responsibilities

Research is currently under political pressure in many places around the world. Prominent examples include the USA, where the President is severely impeding climate research and calling the significance of research in general into question, but also Turkey, where thousands of researchers have lost their jobs and left the country due to repression. But how should the scientific community react? Is political commitment the right strategy? These were the questions asked by Junges Wissenschaftsforum Dahlem on the 14th of July 2016 in a discussion led by the psychologist Prof. Dr. Tanja Gabriele Baudson (TU Dortmund), the scholar of political science and North American studies, Prof. Dr. Christian Lammert (Freie Universität Berlin) and the historian Nazan Maksudyan, PhD (Leibniz-Zentrum Moderner Orient), and moderated by the political scientist Prof. Dr. Verena Blechinger-Talcott (Freie Universität Berlin). The event took place in cooperation with the Dahlem Research School. 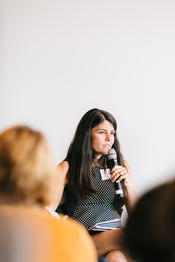 It quickly emerged during the discussion that there are multiple ways for research to react to external pressure. Tanja Gabriele Baudson made a case for direct political commitment. Appalled by Donald Trump’s “alternative facts” policies, she decided to bring the North American “March for Science” to Germany. As a co-initiator, she supervised the protest marches that took place in several German cities on the 22nd of April 2017. She appealed to the audience to defend their values and to advocate freedom, justice and truth.

The developments in Turkey show how quickly these values can erode. Nazan Maksudyan, whose research addresses the Armenian Genocide, among other things, left her home country in 2016. At that time, layoffs and even arrests had already taken place at universities on a massive scale. She herself was increasingly obstructed in presenting or publishing her research findings. In Turkey, she concluded, anyone who deviates from the official standpoint of the government is political. The best way to support researchers who have fled their homes is to help them to continue their research in their new places of residence.

Christian Lammert argued that science should enter into closer dialogue with society. Developments in the US have shown that universities are perceived as part of the establishment, which certain parts of the population do not trust. This should be addressed with research communication that reaches a broad audience. In addition, it is important to advance dialogue with schools in order to convey a better understanding of what constitutes research.

The discussants agreed that research cannot isolate itself as it has always been dependent on political and societal developments. This concerns not only the US and Turkey, but also, in a more subtle way, Europe, where pressure is exerted through the guidelines and agendas of government funding programs. Thus the aim of preserving values and critical thinking applies to everyone. Tanja Gabriele Gaudson concluded that although time in research is always scarce, advocating one’s beliefs is worth it, as one can discover something very valuable in the process: personal freedom.