Teaching in the Light of Diversity

A general categorization of “diversity” by various features is guided by the legal principles and applicable guidelines against discrimination.

Implementing equality implies taking a look at the differences and similarities of structural discrimination in order to avoid hierarchies between various features of diversity. This requires a multidimensional understanding of diversity: individual features of diversity are not intrinsically homogeneous, nor do they appear individually only. In addition, there may be interactions between them.

The widely known – but rather static – “Four Layers of Diversity” model by Gardenswartz and Rowe (1994) provides a clear structurization of features of diversity.

Features of diversity in the context of the university

The transfer of the “Four Layers of Diversity” to the context of the university (cf. Leicht-Scholten 2012) can be further specified as follows: 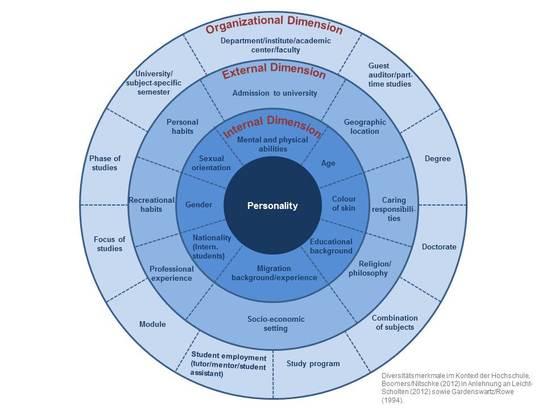 The dimensions shown in the illustration above can be differentiated as follows: