The name of our program refers to the place of its home: Berlin. Just under 800 years old, Berlin has successively been the capital of the Kingdom of Prussia, the German Empire, the Weimar Republic, the Third Reich, East Germany and the reunited Germany. Few capitals have gone through so much radical change and Berlin’s urban structure has been likened to a palimpsest, with frequent erasures and restructuring. Others view Berlin as an ensemble of villages and hardly feel the need to leave their neighborhood. A veritable treasure trove for architectural historians and urban planners, Berlin lends itself to a variety of explorations. As one of its goals, the Berlin Program seeks to gain a deeper understanding of this complex environment where politics, history, culture and art meet. Below is a list of our recent excursions. 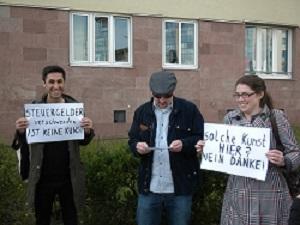 On January 22, 2020 Dr. Scott Krause, BP Alumnus 2018, gave us a tour thorough the AlliiertenMuseum at Clayalle which is in the process of being reconceptualized and will move to Hangar 7 at Tempelhof in a number of years.

On November 24, 2918 Prof. Dr. David Barclay, Executive Director of the German Studies Association and Dr. Scott Krause, AlliiertenMuseum Berlin took us to historical milestones in the City West. Starting with the Kulturforum with the Staatsbibliothek zu Berlin and the Philharmonie, we continued to , then Deutsche Oper. Another stop at Ernst-Euter-Platz, America Haus and the Jewish Community Center in Fasanenstr. We ended the tour at another insitutiion in West Berlin: Schwarzes Cafe.

On October 18, 2018 we enjoyed a tour offered a thematic campus tour

For our walking tour Steven Lauritano, Ph.D. candidate at Yale University and Berlin Program 2013-2014, selected seven sites to investigate questions of spoliation. One can hardly imagine a more ideal urban landscape for such an exploration than Berlin. In his intriguing sexamination of the Märkische Museum, the Senate Department for Urban Development and the Environment, the Ribbeck House (Berlin’s oldest Renaissance building 1624), the former Staatsratsgebäude (seen among architectural historians as an example of “Ost-Moderne”), Schinkel’s Bauakademie (1832-1834, damaged, demolished and now simulated by a huge canvas of brick-red tarpaulin), the Alte Kommandantur (reconstructed by the Bertelsmann-Stiftung) and the old royal library (modelled on plans for the North façade of the Wiener Hofburg) Steven addressed notions of reuse and appropriation. Not only did he lead us through examples of five centuries of building history. The questions at the intersection of architecture, art, and archaeology turned out to be complicated by ideological commitments.

The reuse of materials strikes close to home with most of us as do questions of authenticity and appropriation. This walking tour asked what happens when spolia and copies are used in another historical context and whether their presence creates new meaning. Read the complete report.

Places of Tranquility/Spaces for Reflection

This year we explored places of tranquility in Berlin’s center. Katharina Nobis and Stefan Tornack, both M.A. students in the field of Historical Urban Studies from the Center for Metropolitan Studies at TU Berlin, guided us to some special places in the heart of the capital and provided us with a different and unique perspective on urban space and the history of the city.

2009 marks the 90th anniversary of the founding of a legendary school: the Bauhaus. This tour starts with the avant-garde architecture of the Schaubühne, in the heart of the West on the Kurfürstendamm. Built by Erich Mendelsohn, the group of structures is an example of the early multiple-use urban construction. The tour goes on to the Haus des Rundfunks designed by Hans Poelzig in 1929-1930 and concludes with a walk around Siemensstadt. The unique urban delopment projects implemented in Weimar Germany to provide every German with adequate housing ("jedem Deutschen eine menschenwürdige Wohnung") prompted a number of large building projects. Between 1929-1931 housing associations (Wohnungsbaugesellschaften und –genossenschaften) built some 1400 apartments in Siemensstadt which featured state-of-the-art living including built-in closets. In 2008, UNESCO added six Berlin housing projects to the World Heritage List, among them the Großsiedlung Siemensstadt.

Exploring Marzahn: The History of a Socialist Settlement

Marzahn, a district in the northeast of Berlin, is one of the largest housing project completed in the GDR. Designed and approved by the general planning agency in the early 1970s to solve the GDR’s housing shortage, construction began in 1977. Some 150 000 apartments were built using prefabricated steel-reinforced concrete slabs (Platten). Since the 1990s, considerable investment has been made to redevelop these estates. Today, far from being an ensemble of dull Plattenbauten, many buildings have been remodeled with the use of color, the installment of balconies and the greening of open spaces. Marzahn is home to a number of Berlin’s much loved urban “grüne Oasen”, the Gardens of World being the largest one.

This tour starts underground and traces the history of the breathtaking building project by a look at the basement level housing all the utilities (heating, water, telephone), proceeds to the museum with a model of Marzahn and model apartments and takes a stroll through Marzahn.

By the time of German unification in 1871, the industrial boom had lead to increased urbanization and a new type of housing structure was becoming prominent. The new Mietshaus was a building with three wings (Vorderhaus, Seitenflügel, Hinterhaus) and often a courtyard at its center. A name soon emerged for these structures “Mietskaserne” (literally “rental barracks“).

This tour looks at the development of one neighborhood through time: From the Mietskaserne, to urban planning geared to transportation by car (Autostadt), to Kahlschlagsanierung (renewal by destruction) in the 1960s, to the Behutsame Stadterneuerung (respectful urban redevelopment) in the late 1970s, to Critical Reconstruction, the policy for rebuilding post-war Berlin.

In the period up to the end of the First World War, we find a variety of conceptions of modernisms which are comparable, but in some ways quite opposite to what later became known as international modernism.

This tour takes us to the Monument on the Kreuzberg, Viktoriaquartier,  and Siedlung auf dem Tempelhofer Feld. This estate, inspired by the garden city movement, with concentric street patterns and parks, was originally planned for 2000 single-family houses which featured four rooms, a kitchen a bathroom, running warm water and coal heating and would cost the new owner 20 000 gold marks in 1920.

Some of the most renowned architects were involved in designing innovative housing that would come to serve as a model for social housing the world over. Especially during the Weimar Republic when the city of Berlin was characterized by its political, social, cultural and technical progressiveness, architects greatly contributed to the improvement of living conditions by building affordable high quality apartments.

This tour takes us to Berlin’s southwest where Bruno Taut built one of the world's first modern affordable apartments featuring kitchens, bathrooms, balconies and lots of light and air. The tour proceeds to Tempelhof, where Max Taut, Bruno Taut’s brother built the Haus der Deutschen Buchdrucker, a spectacular example of Neue Sachlichkeit .

The Language of Representation: Architecture in Imperial Germany, Weimar and the Third Reich

Architecture, arguably the most visible of the arts has always been a medium of expression the world over. Not only have kings built spectacular monuments to enshrine their power, so have corporations when they added highly innovative designs to the city’s landscape. The AEG Turbinenhalle (1909) built by Peter Behrens in Berlin Moabit is a case in point. This tour looks at political and corporate architecture in Berlin Mitte in three eras of German history.

Tour through the Bundeskanzleramt by architect Charlotte Frank, Schultes Architekten

Following the move of the government from Bonn (dismissively dubbed “federal village” by some) to Berlin an urban development competition was launched for the construction of the new government district near the German Parliament, the Reichstag. In 1992, Axel Schultes and Charlotte Frank won with their powerful and bold concept “Band des Bundes” that sought to link East and West and the federal institutions with the city’s center.

The tour allows us a unique look inside the nine-storey, 36-metre tall building flanked by five-storey administrative wings. The tour is part one of a two-part event focusing on architecture and politics. Part two will be a conversation between architect Charlotte Frank and political scientist Klaus von Beyme.