Fast Reactions Due to "Precision Protein"

Scientists at Freie Universität, Charité, and the Leibniz Institute for Molecular Pharmacology Present New Findings about Communication between Nerve Cells

Whether you're driving the car or playing soccer – there are many situations in everyday life when we need to respond quickly to external stimuli. But how does our body ensure that the signal transmissions between the nerve cells of our body can occur in fractions of a second? Scientists working at Freie Universität Berlin, Charité – Universitätsmedizin Berlin, and the Leibniz Institute for Molecular Pharmacology within an international research association have made an important contribution toward elucidating this mechanism. They found that a specific protein (Unc13A) at the junctions of the nerve cells – the synapses – is responsible for an extremely precise molecular connection and thus for the ultrafast transmission of stimuli. The findings, which were published in Nature Neuroscience, give insight into the principles of how synapses spatially and temporally and with great precision optimize signal transmission at the molecular level.

Nerve cells communicate by means of electrical and chemical signals. The transmission of stimuli from cell to cell occurs via special connecting points, the synapses. There the incoming electrical signal is converted into a chemical signal and thus transported across the very narrow synaptic cleft that separates two adjacent cells from each other. On the other side it is transformed back into an electric signal and forwarded.

The chemical stimulus transmission occurs via messengers called neurotransmitters that are found in small vesicles (Latin for "bubbles") in the synapse. When an electrical impulse arrives at the synapse, it changes the voltage in the cell membrane, whereby calcium ions briefly flow into the synapse. The increase in calcium concentration in turn causes the vesicles to open toward the synaptic cleft and release the messenger substances, which then lead to the transmission of a signal to the adjacent nerve cell, for example, to contract a muscle. All of this happens within a few milliseconds and is only possible because the distance between vesicles and the channels in the cell membrane, where the calcium is flowing through into the cell, are precisely defined.

Scientists at the NeuroCure Cluster of Excellence, led by Prof. Dr. Stephan Sigrist and Dr. Alexander Walter from the Leibniz Institute for Molecular Pharmacology, have now found out exactly how the mechanism is controlled in the motor neural nervous system of the fruit fly (Drosophila melanogaster).

They discovered that the protein Unc13A links the vesicles filled with neurotransmitters with nanometer precision to the calcium source, i.e., the calcium channels in the cell membrane, and thus enables ultrafast and efficient signal transmission. Two other proteins play a role in the exact positioning of the vesicles; they were identified with help from research groups led by Prof. Dr. Ulrich Stelzl at Universität Graz and Prof. Dr. Markus Wahl at Freie Universität Berlin. Like two calipers on a ruler, these two proteins regulate the well-defined distance between two vesicles and the calcium source.

The researchers found it surprising that the closely related protein Unc13B plays a subordinate role in the signal transmission. The experiments and theoretical calculations seem to indicate that this is due to the fact that the protein is not so closely tied to the calcium source. Unc13B is held in place as part of a protein complex, but at a distance.

The differences in length are on the nanometer scale (1 nanometer = 1 millionth of a millimeter); it was only possible to detect them with a very high-resolution microscope in the laboratory of the Nobel Prize winner in chemistry, Prof. Dr. Stefan Hell at the Max Planck Institute of Biophysical Chemistry in Göttingen. Nevertheless, the scientists are convinced that this leads to completely different functionalities: while Unc13A enables rapid and efficient signal control, Unc13B has a subordinate role due to its greater distance from the calcium source. It seems to be needed in the development of the synapse.

With this study, the scientists have made substantial gains in understanding a principle whose mechanisms are still poorly understood: how synapses control their transmission properties through spatial control of the vesicle positions. 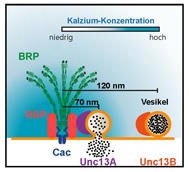 Illustration of neurotransmitter release via Unc13A and Unc13B. Unc13A is positioned at a distance of 70 nm from the calcium source (Cac; blue) via Bruchpilot (BRP; green) and RBP (red). [Bruchpilot is a ubiquitous presynaptic active zone protein.] Unc13B (orange) is in position at a greater distance of 120 nm. The color transition from dark to light blue in the background indicates different levels of calcium concentrations that are detected by vesicles.

The image may be downloaded by members of the media and used free of charge in connection with reporting on the content of this press release, provided that due credit is given to Dr. Alexander Matthias Walter.

Link to the publication in Nature Neuroscience: doi:10.1038/nn.4364
http://www.nature.com/neuro/journal/vaop/ncurrent/full/nn.4364.html