On the occasion of the 7th European Congress of Mathematics (7ECM) from July 18 to 22 in Berlin, mathematicians from Freie Universität will present their subject to the public at three different subway stations. The team led by Professor Ehrhard Behrends from the Department of Mathematics and Computer Science will give short presentations and demonstrations at the subway stations Wittenbergplatz, Potsdamer Platz, and Alexanderplatz (all on Line 2). Each day between 10 a.m. and 4 p.m., the presentations will give passers-by an impression of the diverse aspects of mathematics including its role in music and art and its importance for everyday objects such as in cryptography or in algorithms of search engines like Google. The mathematicians will also surprise the passengers with paradoxes and with magic tricks. Researchers and students from other European countries will also be participating in the activities.

The European Congress of Mathematics is being held for the 7th time, but for the first time in Berlin. The main host is Technische Universität Berlin, but many scientists at Freie Universität are also involved in organizing it. About 700 scientists from almost all the European countries are expected to attend. 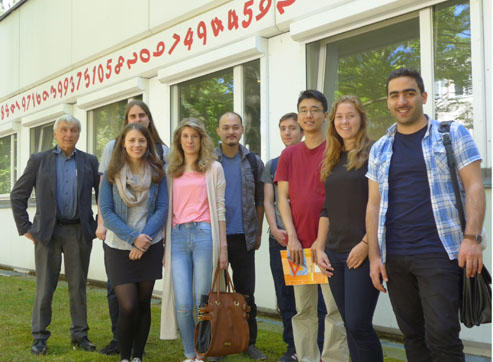 Caption: Ehrhard Behrends (at left) and his team in front of the Pi Building on Arnimalle 6.

The picture may be used free of charge within the context of the press release and provided that due credit is given to "Prof. Dr. Ehrhard Behrends."