Scientists at the German Institute for Economic Research, Freie Universität Berlin, and the University of Giessen predict possible outcomes based on fair market value method

The outcome of the European Championship in France is particularly uncertain this year according to predictions by scientists at Freie Universität Berlin, the University of Giessen, and the German Institute for Economic Research. The professors Jürgen Gerhards, Michael Mutz, and Gert G. Wagner calculated the fair market values for the nominees of all 24 teams, and came to the conclusion that the final game will be played by Germany (with the highest market value of 562 million euros) and Spain (558 million euros). The three scientists conjecture that in the first semi-final, the World Cup champion Germany will win against France (market value: 487 million euros), and in the second semi-final, the European champion Spain will win against England (477). The predictions are based on data taken from the website www.transfermarkt.de, which is operated by soccer fans and pros. The scientists took into account the loss of Antonio Rüdiger in the DFB team on Tuesday and the subsequent nomination of Jonathan Tah. The European Championship will take place from June 10 through July 10, 2016.

In the group stage the differences in market value among the teams is the greatest; for example, Albania’s team totaling 46 million euros will play against France’s team with market values totaling 487 million euros. The scientists assume that within the groups, the traditionally strong teams will prevail. Starting with the quarter finals, predictions are more difficult. It isn’t possible to identify a clear favorite for the title. Germany will compete in France with a team value of 562 million euros. Despite the loss of Marco Reus, whose transfer value alone is estimated at 45 million euros, the German team is the most expensive. However, the margin to the other likely winners is not that great. The 23 Spanish players nominated by Vicente del Bosque have a total transfer value of about 558 million euros. But, the scientists emphasize that the other top competitors, France (487 million), England (477), and Belgium (461) are all expensive teams and consist of excellent players.

According to the study, the main difference between the Euro 2016 in France and the last World Cup and Euro Cup is that the differences in market value among the teams have shrunk greatly. This is particularly true for the relation between Germany and Spain. Besides Germany, Belgium is the other team that greatly increased its market value, say the scientists. Many players on the Belgium team have made a leap into the absolute world class and command correspondingly high transfer fees.

Figure 1: Market values of team members of all 24 Euro 2016 participants 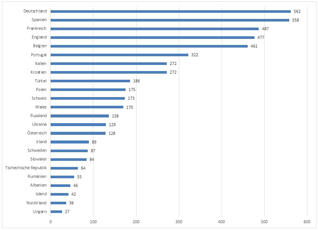 Figure 2: Performance of the team members of the four "hottest" championship favorites, 2010–2016 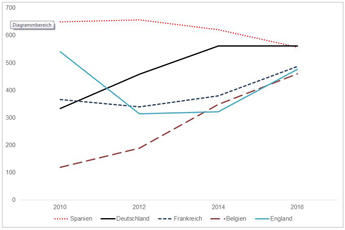 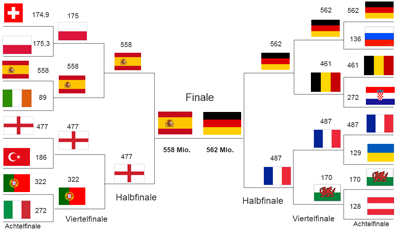 The figures may be downloaded by media representatives. They may be used free of charge in the context of the press release, provided that due credit is given.