Polymeric carbon nitride is an organic material with interesting optoelectronic properties. As an inexpensive photocatalyst, it can be used to facilitate water splitting using sunlight. Joint research by Helmholtz-Zentrum Berlin, the University of Rostock, and Freie Universität Berlin as well as other partners has now investigated for the first time how light creates charge carriers in this class of materials and established details about charge mobility and lifetimes. They discovered surprising characteristics in their investigations that provide prospects for new applications, in conjunction with graphene for example.

Polymeric carbon nitrides are organic compounds synthesized to form a yellow powder of a myriad of nanocrystals. The crystalline structure resembles that of graphite because the carbon nitride groups are chemically bound only in layers, while just weak Van der Waals forces provide cohesion between these layers. It was already known that light is able to create an electron-hole pair in this class of materials. So there have already been numerous attempts to employ polymeric carbon nitrides as cost-effective photocatalysts for solar-powered water splitting. However, the efficiency levels so far have remained comparatively low.

Now a team headed by Dr. Christoph Merschjann (HZB and Freie Universität Berlin) and Prof. Stefan Lochbrunner (University of Rostock) have for the first time precisely probed the processes occurring during light-induced charge separation. “The most interesting result has been that charges are basically only transported along one dimension during this process, perpendicular to the graphite-like layers”, explains Merschjann. The light creates an electron-hole pair that subsequently migrates in opposing directions. Using femtosecond spectroscopy as well as other spectroscopic time-domain methods, the researchers were able to make the first quantitative mobility and lifetime measurements on the charge carriers. This revealed that the charge mobility attains values similar to those in conventional organic semiconductor materials. Moreover, the charge carriers are long-lived before recombining again.

Polymeric carbon nitrides are not only non-toxic and cost-effective, they are also extremely durable because they are chemically very stable and can withstand temperatures of up to about 500 °C. Components made of these kinds of compounds might therefore be employed in environments that are unsuitable for today’s organic electronics. Merschjann finds the prospect of growing these compounds on ordered substrates, such as graphene for example, especially interesting though. This is because graphene possesses extremely high in-plane conductivity, while carbon nitrides primarily conduct perpendicular to the sheets. “Carbon nitrides need not fear the competition with conventional organic semiconductor materials. On the contrary, completely new kinds of all-organic optoelectronic components might be built using their property of being essentially one-dimensional semiconductors”, Merschjann hopes. He is currently working on making direct measurements of the charge carriers in a DFG-funded research project at Freie Universität Berlin.

The cooperation was initiated by the BMBF Cluster Projekct “Light2Hydrogen.”

The results were published in the renowned periodical Advanced Materials: 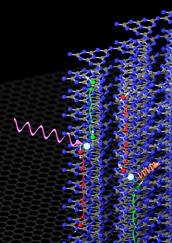 The picture is free of charge provided credit is given to C. Merschjann.

The carbon nitride groups (blue: nitrogen, grey: carbon) chemically combine with one another only in the plane, similar to carbon atoms in graphite. This is why chemists speak of the material as graphitic carbon nitride. In contrast, there is only very weak bonding between the sheets. However, charge carriers in polymeric carbon nitrides always take paths perpendicular to the sheets, as Merschjann’s group has now shown. Light creates an electron-hole pair that moves perpendicular to the sheets. The opposite happens when an electron and hole meet under certain conditions (forming a singlet exciton) and emit light (fluorescence). A graphene lattice is shown in the background (hexagonal grey structure). These kinds of organic semiconductor materials might be grown upon ordered graphene substrates in the future to produce novel optoelectronic components. Image: C. Merschjann