On November 16 a stolperstein will be laid on Heinrich Heine Strasse in Kreuzberg to commemorate the fate of the Berlin furrier Leo Adler (1898–1939), who was murdered by the Nazis. Leo Adler, a Polish citizen, was one of several thousand Berlin Jews with Polish nationality who became victims of what the Nazis designated Polenaktion, the first major mass deportations from the German Reich between October 27 and 29, 1938. The stone laying and memorial service will take place at 2:15 p.m. Adler's last surviving daughter, Rita Berger, and his grandchildren will be in attendance. The stolpersteins commemorating victims of the Nazi era are brass plates created by the Cologne sculptor Gunter Demnig and laid in the sidewalk in front of the victim's last freely chosen place of residence. In Berlin alone, more than 5000 of these memorial stones have been laid to date.

Véronique Mickisch, a student at Freie Universität Berlin, who as part of a seminar did research on the crimes against the Adler family, visited Rita Berger in Long Beach, New York. The seminar dealing with the so-called Polenaktion in Berlin was taught by Prof. Dr. Gertrud Pickhan and Alina Bothe during the previous winter semester at the Institute for East European Studies, and it won a teaching award. It was Mickisch who first had the idea of laying a stolperstein for Leo Adler.

After the stolperstein has been laid in the street, there will be a memorial service for Leo Adler in the Friedrichshain Kreuzberg Museum with his family in attendance. Univ.-Prof. Dr. Gertrud Pickhan from the Department of History at the Institute for East European Studies, Freie Universität Berlin, will speak about Leo Adler and the Polenaktion in Berlin.

Leo Adler and his wife Sabina moved to Berlin with their families at the turn of the century. Together they opened and built up a fur shop in Kreuzberg that ran very well until 1933. After that, due to the racial laws of the Nazis, many restrictions were instituted as to how they could conduct their business. The couple had three children together: Norbert (1922–2011), Fedor (1925–2006), and Rita (*1929). Shortly before the Polenaktion, Leo Adler was warned by a friend, and he and his oldest son Norbert spent the night with other friends. Thus they escaped arrest. However, when they returned home, Sabina Adler had been so intimidated by the police that Leo and Norbert turned themselves in voluntarily so as not to further endanger the entire family. The father and son were then deported to Zbąszyn. Since he was still a minor, after a few days Norbert was allowed to travel to Dynów in southern Poland, where the family had relatives. Leo had to remain in Zbąszyn. On March 28, 1939, Sabina Berger and the two younger children were also forced by the police to move back to Poland. When the war started, Norbert and Sabina were in Warsaw, where they were trying without results to get visas for the United States. Fedor and Rita traveled with their father to Dynów in southern Poland. There Leo Adler was murdered on September 16, 1939, along with 200 other Jewish men in one of the first massacres by the Woyrsch Einsatzgruppe ("Special Purpose Operational Group") specifically charged with terrorizing and murdering the Jewish population of Poland. After fleeing with great difficulties to the Soviet-occupied part of Poland, Fedor and Rita miraculously found their mother and Norbert in Przemyśl. In the spring of 1940, the entire family was deported by the Soviet secret service, the NKWD, to Siberia, where they stayed until 1946.

For Rita Berger, nee Adler, laying the stolperstein in honor of her father, has great significance. She is not traveling alone to Berlin, but with her husband and about 15 relatives, including several grandchildren and great-grandchildren of Leo Adler. Leo Adler's grandson summarized the significance of the event as follows: “Memorials are meant to mark a person's life and final resting place – but, like most Holocaust victims, Leo Adler has no personal grave. This project and this memorial stone therefore serves as a permanent, remarkable, and worthy recollection of Leo's life as a family man, a Jew, and a Berliner."

A student initiative emerged from the seminar dealing with the Nazis' Polenaktion; the students decided to lay stolpersteins for all of the Polish Jews who were deported from Berlin in 1938 and then murdered by the Nazis. To finance these stones, they started a crowdfunding initiative on the Betterplace website and set up a Facebook page. The stolperstein ceremony for Leo Adler on November 16 will be the first one resulting from this initiative.

Prof. Dr. Gertrud Pickhan stresses the importance of the issue and the students' achievements: "With the seminar and the planned exhibition we are closing a gap in the research on the history of persecution in Berlin. It is impressive to see how engaged the students worked in class and how they have succeeded in organizing the purchase of the first memorial stone resulting from their research."

The so-called Polenaktion was the first mass deportation in the Third Reich. Between October 27 and 29, 1938, more than 17,000 Jews with Polish nationality living in all parts of the "German Reich" were arrested and deported to Poland. In most cities entire families were deported. In Berlin it was mainly men and male teenagers. The deportees were transported by train to the Polish border, where they spent the cold, wet nights in "no man's land." Since the Polish government refused entry, about 9,000 people were stranded in the German-Polish border town of Zbąszyn, along the Berlin-Warsaw railway line. Several thousand had to wait in this little town with fewer than 5,000 inhabitants until the summer of 1939. On the eve of the German invasion of Poland, they were allowed to continue their journey into Poland. Some of them succeeded in emigrating. After a few months, following a German-Polish agreement, up to 1,000 of the deportees at a time were allowed to return to Germany briefly to close down their businesses, empty out their homes, and gather their family members to return to Poland. One of these families was the Grynszpan family from Hannover; on November 7, 1938, their oldest son Herschel assassinated the German diplomat Ernst vom Rath in Paris, which provided the Nazis with a pretext for the Kristallnacht pogroms. Those affected in Berlin included the young Marcel Reich-Ranicki, who did not have to stay in Zbąszyn, but was allowed to travel to his family in Warsaw. In his memoir Mein Leben (My Life) he describes at length his experiences during the Polenaktion.

During the 2014/2015 winter semester Prof. Dr. Gertrud Pickhan and Alina Bothe taught a research seminar at Freie Universität Berlin at the Institute for East European Studies that dealt with the so-called Polenaktion in Berlin. The goal of the seminar was for students to do independent research and write biographical sketches of the families living in Berlin who had been victims of the so-called Polenaktion. So far the students were able to trace the stories of 13 families, including that of the Adler family, whose history was researched by Véronique Mickisch. The seminar was awarded a 2015/2016 Teaching Fellowship by the USC Shoah Foundation, and a modified version is being offered again this semester. Plans are underway to present the students' findings in an exhibition in 2017 that is being organized by the history department of the Institute for East European Studies at Freie Universität Berlin along with the Aktives Museum (Active Museum) that will depict the history of the Polenaktion in Berlin. 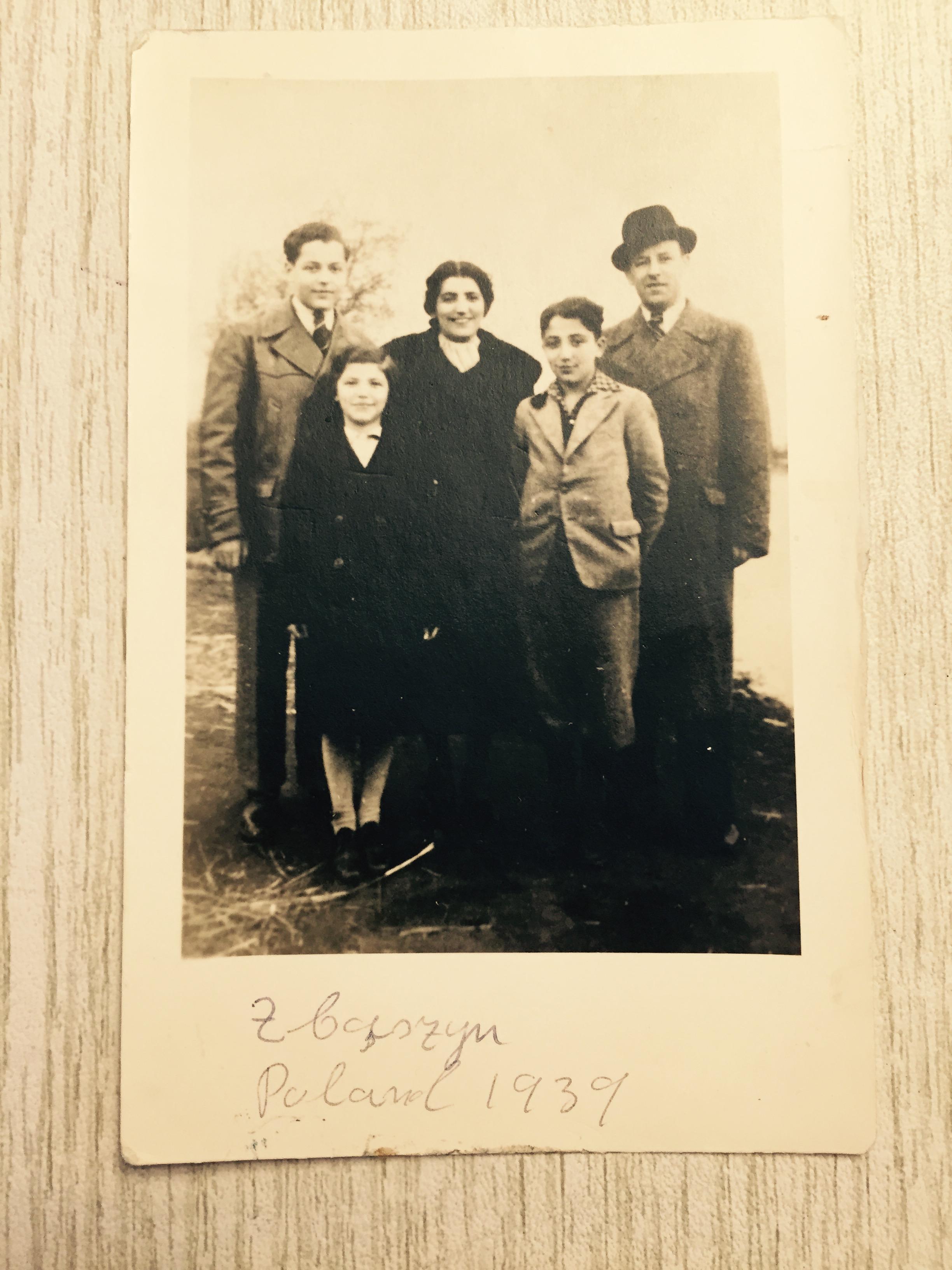 Leo and Sabine Adler with their children Norbert, Fedor, and Rita in Zbaszyn, 1939. Reprint free of charge, provided due credit is given: "This photograph is the property of the Berger family."

Links to the Crowdfunding Initiative