A team of researchers from Berlin succeeded in an effort to fundamentally improve carbohydrate analysis. With the new method, developed by Prof. Kevin Pagel (Freie Universität Berlin and Fritz Haber Institute of the Max Planck Society) and Prof. Peter Seeberger (Max Planck Institute of Colloids and Interfaces and Freie Universität Berlin), complex glycans, building blocks of life such as DNA and proteins, can now be sequenced. The quality control of synthetic carbohydrates is now possible as minimal impurities can be traced faster and more precisely. The new method is essential for the development of novel carbohydrate vaccines, drugs, and diagnostics.

Prof. Seeberger explains: “The new method is fast, reliable and sensitive. The glycosciences will get a push, comparable to the advances when gene sequencing was first developed.” The structure of carbohydrates is much more complicated than that of genetic material or proteins

Carbohydrate chains can be formed from more than 100 building blocks that can be can be linked together in branched chains and these can have different spatial structures, called anomers. In comparison to that, DNA molecules that consist of 4 building blocks, and proteins that are based on 20 amino acids are comparatively simple.

Seven Nobel Prizes were awarded in the glycosciences up until 1974. After that, however, the advances in analytical methods did not keep up with those made in genetics. Glycans are important as sugars that cover human and bacterial cell surfaces are an essential part of the immune response and recognition events such as fertilization.

The incredible diversity of carbohydrates (which merely consist of carbon, hydrogen, and oxygen) is a general challenge for chemists. Carbohydrate building blocks can link in many different ways. Even simple carbohydrates that have the same number of atoms and the same mass, may differ in only one binding angle. These almost identical molecules, called isomers, exhibit very different biological functions. Glucose and galactose for example have an identical formula (C6H12O6 ) but their functions are different.

Chemists use tricks to identify molecules because most molecules can´t be observed on the atomic level. Hence the molecular mass, electronic or electromagnetic properties are measured. These methods, however, cannot resolve the problems associated with carbohydrate isomers. Carbohydrate molecules consisting of the same number of specific atoms can differ in their composition, connectivity, and configuration. So far their differentiation was a laborious and time-consuming task that required large amounts of sample.

The scientists from Berlin and Potsdam take advantage of the different shapes of carbohydrates. Depending on their shape, the molecules require different times to pass through a gas filled tube - comparable to the drag coefficient in a wind tunnel. Kevin Pagel and his colleagues combine this ion mobility measurement with mass spectrometry to find differences in composition, connectivity and configuration. Larger molecules are broken into fragments; during this fragmentation, however, the structural properties of the resulting parts are not altered such that the sum of fragment properties reflects that of the large molecule. This combination method is reminiscent of the Sherlock Holmes quote: “Once you eliminate the impossible, what remains must be the truth.”

Combined with a database, currently under development, and enlarged through the rapidly increasing collaborations with other scientists, this method will be generalized in the future. Once a molecule is entered in the database, automated processes can be used to recognize them.

The new method will enable quality control for synthetic carbohydrates produced by synthesis robots, adding building blocks like pearls on a string. Until now, impurities were hard to detect at levels below 5 percent while the new carbohydrate “wind tunnel” drastically lowers the sensitivity to 0.1 percent.

Glycobiology - the research field that focused on studying biologically active carbohydrates - is a rapidly developing field and Berlin is doubtlessly one of the global centers.

The following press photos can be downloaded free of charge, provided the photographer Sven Jungtow is credited (more pictures on request). 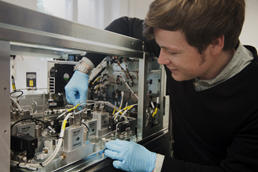 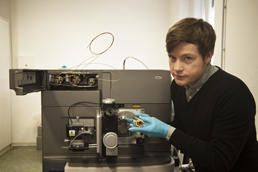