Biomembranes enclose biological cells like a skin. They also surround organelles that carry out important functions in metabolism and cell division. Scientists have long known in principle how biomembranes are built up, and also that water molecules play a role in maintaining the optimal distance between neighboring membranes—otherwise they could not fulfill their vital functions. Now, with the help of computer simulations, scientists from Technische Universität München (TUM) and Freie Universität Berlin have discovered two different mechanisms that prevent neighboring membrane surfaces from sticking together. Their results appear in the Proceedings of the National Academy of Sciences.

Images for journalists are available at: http://www.fu-berlin.de/en/presse/informationen/fup/2012/fup_12_240

They may be used without charge, the only stipulation being that the name of the source must always be provided. Source: Emanuel Schneck

Biomembranes consist of lipids, chain-like fat molecules stacked side by side. In the aqueous environment of cells, the lipids organize themselves into a so-called bilayer with fat-soluble "hydrophobic" ends of the molecular chains facing inward and water-soluble "hydrophilic" ends facing outward. If the water-soluble surfaces of two membranes come too close to each other, a pressure is generated—hydration repulsion—that prevents the membrane surfaces from touching. Between two intact biomembranes there is always a film of water just a few nanometers thick. Until now, however, it was unclear how hydration repulsion works on the molecular level.

By means of complex simulations, the scientists discovered two different mechanisms whose contribution depends on the distance between the membranes. If the membranes are separated by around one nanometer or more, the water molecules play the decisive role in holding them apart. Since they have to orient themselves simultaneously to the lipids of both membrane surfaces, they give up their preferred spatial arrangement. Then they function like "bumpers," pushing the membranes apart. When the separation is smaller, the lipids in the opposing membrane surfaces mutually inhibit their own mobility, and the repulsive force is increased.

For some time, these two mechanisms had been discussed as possible explanations for hydration repulsion. Now, with their computer simulations, the scientists from TUM and FU Berlin have for the first time correctly predicted the strength of the pressure, that is, in agreement with experimental results. In doing so, they have elucidated in detail the significance of the different mechanisms. "We were able to predict the water pressure so accurately because we determined the chemical potential of the water precisely in our computations," explains Dr. Emanuel Schneck, formerly a member of the work group of FU Berlin Professor Roland Netz (then at TUM). Schneck is currently a researcher at the Institute Laue Langevin (ILL). "The chemical potential indicates how 'willing' the water molecules are to stay in a particular spot. In order for us to obtain correct results, the potential at the membrane surfaces and the potential in the surrounding water must have the same value in our simulations."

The researchers now want to translate their results to many more biological surfaces and, in the process, initiate considerably more complex computer models.

This research was supported by the German Research Foundation (DFG SFB 765), and by the Ministry for Economy and Technology (BMWi) in an Allianz Industrie Forschung (AiF) project framework.

Technische Universitaet Muenchen (TUM) is one of Europe’s leading universities. It has roughly 480 professors, 9000 academic and non-academic staff, and 31,000 students. It focuses on the engineering sciences, natural sciences, life sciences, medicine, and economic sciences. After winning numerous awards, it was selected as an “Elite University” in 2006 and 2012 by the Science Council (Wissenschaftsrat) and the German Research Foundation (DFG). The university’s global network includes an outpost with a research campus in Singapore. TUM is dedicated to the ideal of a top-level research-based entrepreneurial university. 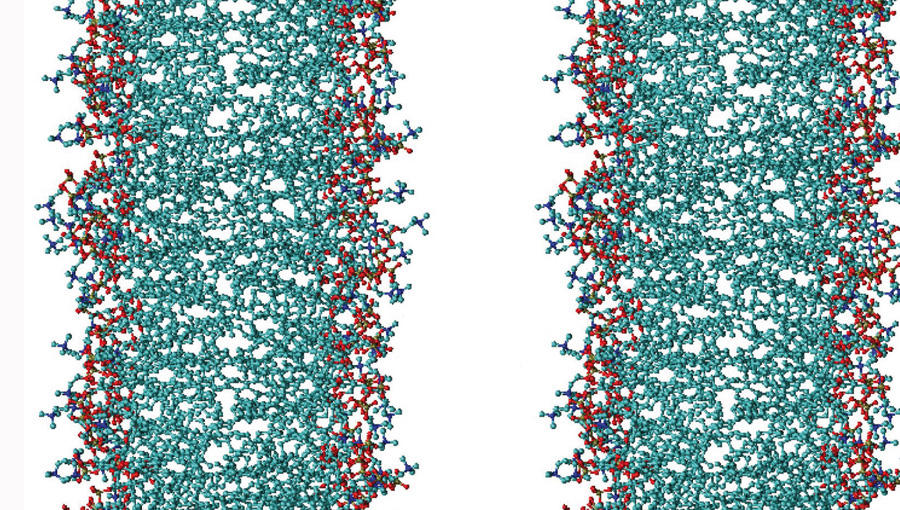 If they stick together, biomembranes lose their biological functions. A thin film of water prevents the membranes (left and right) from getting too close. 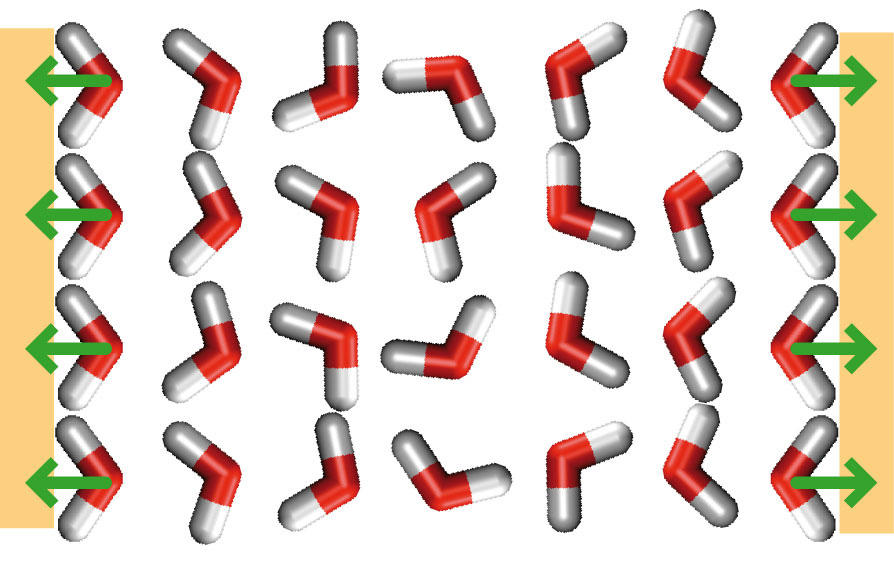 Repulsion by water molecules is the dominant mechanism when the separation between two biomembranes is larger than around 1 nanometer. The molecules are oriented toward the lipids in the membrane and lose their preferred spatial arrangement –repulsion arises, keeping the membranes apart. 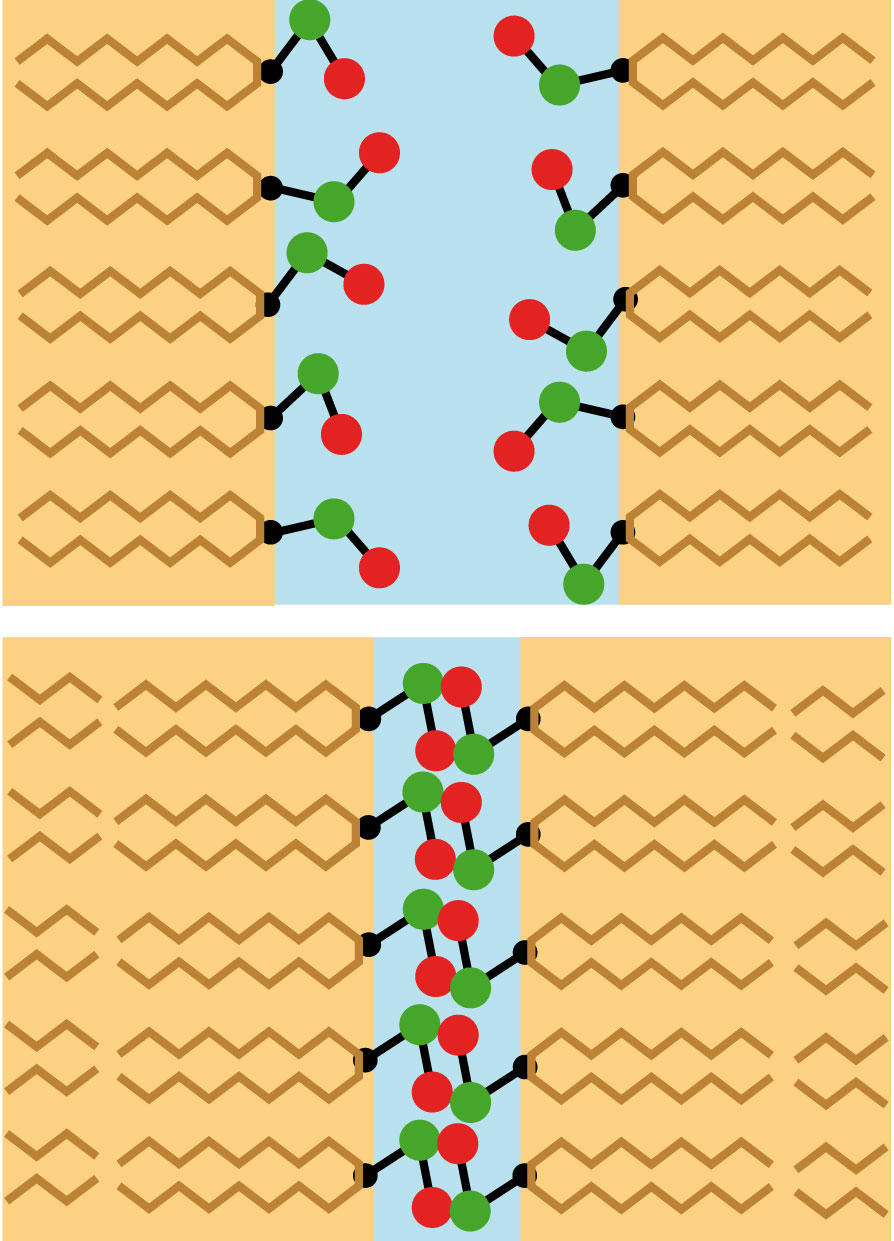 If the distance between membranes is less than around 1 nanometer, the influence of lipid molecules prevails: At small distances they block each others’ mobility (lower image).