"Behavior" is generally associated with animals and not with plants. Flowering nettle plants, however, have an unusually complex repertoire of behavior in order to optimize cross-pollination by insects. They seem more like animals and are unrivaled in their complexity in the plant kingdom. Scientists at the University of Bonn and Freie Universität Berlin have now studied in detail which stimuli these unusual plants react to. The results were published in the international online journal of the Public Library of Science PLoS ONE.

Photos are available for representatives of the media: www.fu-berlin.de/presse/informationen/fup/2012/fup_12_227. They are free of royalty fees as long as credit is given to Dr. Tilo Henning/Freie Universität Berlin.

Native primarily to South America, flowering nettle plants have colorful intricate flowers and are very attractive. Some species reach imposing heights and are feared for their strong stinging hairs. Scientists, however, are not impressed by this dangerous beauty, but rather by the sophisticated behavior of this family of plants. "Through complex mechanisms, flowering nettle plants have perfected their pollination by insects or hummingbirds," said the director of the Botanic Garden of the University of Bonn, Prof. Dr. Maximilian Weigend, who has been studying the strange plant family for many years.

All plants attempt to avoid being pollinated with their own pollen, but rather with pollen from another plant of the same species. That way "the resulting offspring carry a new mixed heritage and thereby have greater evolutionary adaptability," says lead author Dr. Tilo Henning, a former doctoral student of Prof. Weigend and a researcher in the Morphology and Systematics of Phanerogams Group at the Institute of Biology, Freie Universität Berlin. An organism propagating with close relatives or with itself – which is possible in the plant kingdom – results in inbreeding and stunted growth.

Bees are the most common pollinators and their behavior when they find little or no nectar in a flower, has been well studied. They do not fly to the next blossom on the same plant, but rather fly farther away, with a high probability of landing on a neighboring plant. Over the course of evolution, flowering nettle plants have optimally adapted to this behavior. To ensure that no valuable pollen is wasted, the plants immediately put new pollen in the flowers where the nectar was just collected. Like other plants, the blossoms of the flowering nettle plants attract pollinators with sweet nectar that is placed in special receptacles on the base of the blossom. If a bee nibbles on one, the soft pressure is enough to trigger a sophisticated mechanism, tilting the stamens toward the center of the blossom.

Weigand compares the process with loading a revolver, a principle that was first described by a scientist in Bonn, Prof. Dr. Wittmann, in 1997. “When the next bee approaches, it lightly touches the stamens in the center of the flower and becomes loaded with pollen.” The bee will not find nectar because the previous visitor to the plant had already nibbled on it, and producing more nectar takes the plant several hours. Then the insect does exactly what it should: laden with fresh pollen, it flies to the next plant and pollinates the flowers there. "This ensures the desired cross-pollination," says Dr. Henning.

While most plants remain rather passive during the flowering season, closing their blossoms only in the rain or darkness, the flowers of nettles exercise virtually total control over their pollen supply. "The complexity of their behavior reminds one more of an animal rather than a plant," said Prof. Weigend. Flowering nettle plants perceive many stimuli from the environment, process them, and adjust their behavior accordingly. The scientists in Bonn and Berlin gained this information from elaborate experiments. When the temperature is lower than twelve degrees Celsius or at night, the stamens are not accessible to pollinators. During those times, no bees are out flying around.

As in the magazine of a gun, over 100 stamens are lined up in a row in a flower and when triggered by insects or hummingbirds, flap in succession toward the center of the flower. "That permits pollen to be delivered in portions, up to 100 times," said Dr. Henning. While other  flowers get rid of their pollen in one or a few servings, the flowering nettle plants can thus release their pollen in numerous, approximately equal portions, to a hundred different visitors – dramatically increasing the likelihood of successful pollen export to another plant.

The degree to which flowering nettle plants have adapted their behavior to pollinators is also evident when no insect happens to come by. In that case the plants extend the lifetime of their flowers and present fresh pollen only at long intervals to increase the chances of attracting a pollinator. The researchers were also surprised how fast the stamens moved to the center of the flower after a bee moved the nectar pot: two to three minutes are sufficient. "You can observe the movement with the naked eye, which is quite unusual," said Prof. Weigend. "Such complex behavior is unknown in any other plant family." With frequent insect visits to the flowers, pollen presentation can be accelerated up to about 30-fold.

The Botanic Gardens of the University of Bonn at Poppelsdorf Palace have 15 of the 300 known species of flowering nettle plants, which according to Prof. Weigend is a unique situation. He received most of the seeds for the plants from partners in South America with whom he has been cooperating for a long time. Warning signs for visitors were placed in the Botanic Gardens, as the plants cause burning sensations and allergic skin reactions. According to Weigand, the warnings should not be taken lightly. 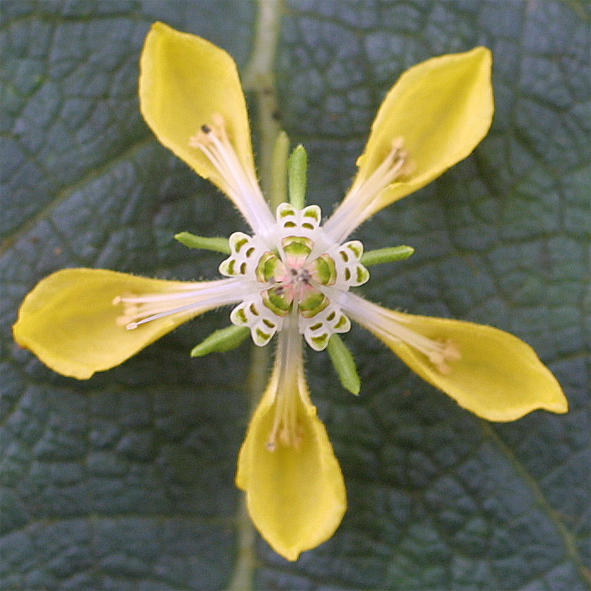