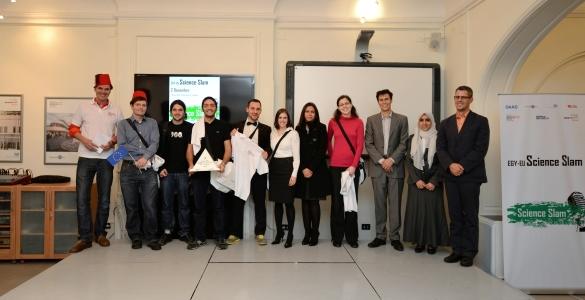 After the very successful “First Berlin Science Slam in Cairo” organized on 24 April 2012 by Freie Universität Berlin, the German Science Centre in Cairo and its partners opened the stage on 2 December 2012 for young scientists from Egypt, Germany and other member states of the European Union to creatively present their research topics to the audience. Six doctoral candidates from Egypt, Germany, Spain and Hungary currently conducting their research at German universities engaged in a contest and presented their research in an entertaining way.

The candidates got ten minutes each to show their skills on stage. The contesters used different types of presentation to persuade the audience. Plush toys, cartoon characters and animations made for amusement and helped presenting the complex connections in simple abstracts. The performances were judged by the audience and the jury with Heba Gaber, Science Officer of the EU, Dr. Michael Harms, Head of DAAD Cairo Office, Heba Afifi, Director of the Support Office for the Ambassador Scientists of the Alexander von Humboldt Foundation and Florian Kohstall, Head of Freie Universität Berlin Cairo Office. The event was moderated by Dr. Ralph Bodenstein, DAAD lector at Cairo University.

Sebastian Koeffer, a doctoral student at the European Research Center of Information Systems of the University Münster, illustrated how he and his colleagues try to figure out what are the IT consumer requirements in the future. Adrian Gonzalez Casanova who makes his mathematical research at the TU Berlin described 100 years of history of the study of evolution. The team of Julia Knifka and Jörg Hartmann explained the radical change of the written book culture with the rise of interactive media. The defending champion Ágnes Cseh from the Berlin Mathematical School showed how Mathematics model complex situations and which decision is the optimal choice. The winner of the EGY EU Science Slam Hany Abo El Wafa, who is researching at TU München, presented his analysis of the urbanization phenomenon and possible solutions.