The Play's the Thing? Remembering Theatre in the Age of Digital Reproduction 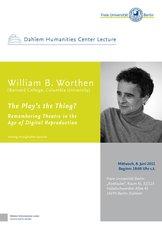 Produced in 2000, Michael Almereyda's film Hamlet updates Shakespeare's play to contemporary New York, redefining the Danish court as the leaders of the Elsinore Corporation. But in many ways the most salient element of the film is its attention to contemporary technologies: Hamlet records his thoughts on video, Claudius communicates via fax, Ophelia is told to get to a nunnery on her answering machine. Yet this element of the film is also what most directly threatens its obsolescence: Hamlet composes his "Mousetrap" film digitally, but Elsinore seems on the threshold of the digital revolution. Taking this film as a point of departure, I consider the film's displacement of theatre as an instance of its meditation on the process of performance and technological succession.