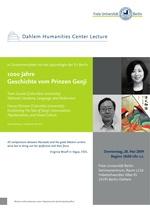 This talk examines the critical discourse that emerged around The Tale ofGenji from the 1880s to the 1930s in relation to modern notions of nationalliterature and national language. The Tale of Genji not only played a majorrole in the construction of national literature andlanguage; the discourse surrounding this work also played a significant rolein the formation of modernist literary discourse in Japan.

This talk examines the impact that The Tale of Genji has had on Japaneseculture from its inception through the post-war era, examining threeintersecting issues: canonization, popularization, and visual culture. TheTale of Genji was not only placed at the pinnacle of high culture it becamea phenomenon of popular culture, appearing in a number of different visualmedia such as painting, illustrated books, ukiyo-e, theater, film, andmanga.