God and Being: Comparative Remarks on Hindu and Christian Theology 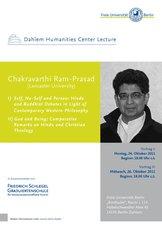 In continental and postmodern theology, the questions of Being and God are seen as central to medieval Christian theology, with fruitful re-interpretation of figures like Augustine, Aquinas, Cusanus and Eckhart. Hindu traditions also explored many similar ideas, engaging the ancient concept of brahman (the deep presence of explanatory reality) with a theology of a gracious God (īśvara). I will offer an interpretive sketch of two influential Hindu positions on the relationship between reality and God that wrestle with issues of God’s subjective density, Being and beings, worshipful devotion, and God’s relationship with Being, in light of some contemporary Christian discussions.