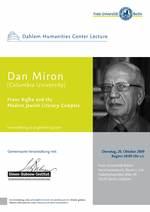 Franz Kafka once wrote, that German-Jewish writers (and, by inference, all Jewish writers using non-Jewish languages) faced three "Impossibilities:" that of not writing at all; that of writing in German; that of writing in any other language. Whereas this seems to agree with the nationalist and Zionist notions that a modern Jewish liteature could be "legitimately" written only in a Jewish language (and Zionists would add: only in Hebrew), the truth was, that Kafka regarded all brands of modern Jewish writing as "impossible," since, he belived, "Jewishness" (Judensein) itself inherently contradicted modernity. This lecture explains the logic of Kafka's tragic "theory" of modern Jewish writing, which, he said, could turn only to "despair" (Verzweiflung) as a source of inspiration. However, despair constituted "Eine Inspiration, ehrenwert wie irgendeine andere."