Our Words and Theirs. A Reflection on the Historian’s Craft Today 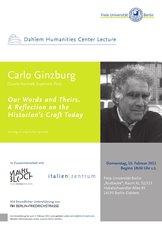 What is the relationship between the historian’s language and the language used by  the actors of history – the individuals  he/she writes about? A seemingly innocent question, which  has  unexpected implications: cognitive, ethical, political. A reflection on  them will throw much light on the historian’s craft and its  contentious dialogue with contiguous disciplines – from anthropology to literary criticism – in the globalized  world we live in.