Scholars and Spies: The Emergence of Area Studies in the United States and the Problem of Empire 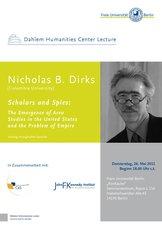 It is commonly assumed that area studies programs in the United States were born out of the cold war, but in fact they began during World War II, primarily in the Office of Strategic Services (OSS).  In this paper I will review the origins of area studies in general, and South Asian area studies in particular, by looking at the organization of knowledge production in the Research and Analysis Branch in Washington, as well as through OSS activities in Asia itself.  I will also comment on the growing U.S. concern about, and opposition to, the continuation of British imperial rule in India, in the context of newly emerging US interests in South Asia and a different kind of post-war world order.