The Interweaving Loop in Moroccan Theatre 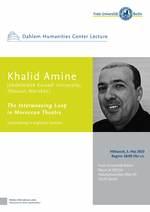 Amine’s paper seeks to explore aspects and processes of what Erika Fischer-Lichte calls ‘performance cultures in Interweaving’ in Moroccan Theatre today, a theatre that is construed within a third space as a liminal site of enunciation that permanently reassesses fluctuating boundaries between tradition and modernity, East and West, past and present, orality and literacy, Semitism and Latinity... Liminality, and not hybridity, has been a dominant form of interweaving. It is not simply a fusion of two or more pure moments, but the persistent emergence of third spaces that transform, renew, and recreate different kinds of writing out of existing models. And this liminality constitutes their theatrical difference, or rather, their theatrical modernity that can only be a postcolonial modernity. Amine’s intention is to bring to light marginalized voices and bodies of inquiry into performance research, and meanwhile he proposes to offer a few elements of reflection and critique of the postcolonial debate. Moroccan theatre’s ‘hybridity’, however, cannot be an inexorable condition forever, insofar as it is characteristic to its historical positioning rather than a manifestation of an adamant inner life of postcolonial artists. In this context, Moroccan re-enactments of Western Canons are not simply demythologized forms of writing back re-located within the emerging space of Moroccan postcoloniality, but also liminal third spaces that elude the politics of polarity and Manichaeism. In brief, self-reflexive negotiations within the space of Moroccan theatre are not simply supplements that reproduce the myth of big narratives through a simple palimpsest; rather, they transform the conditions of the original texts, only to emerge as new and different kinds of performance texts. The European models, then, become crossroads and continuum of intersections, encounters, and negotiations; the outcome is a complex palimpsest whereby the postcolonial artist is confronted with the necessity to interpolate between different language systems as well as different discursive practices and systems of thought.