Furthermore, over the years both universities have been cooperating in teaching and research. During their meeting, the President of the AUC, Mr. Francis J. Ricciardone, explained to Mr. Krach the values upon which the AUC was built upon as well as the plans of the university in regards to international students, specifically for those coming from Germany. 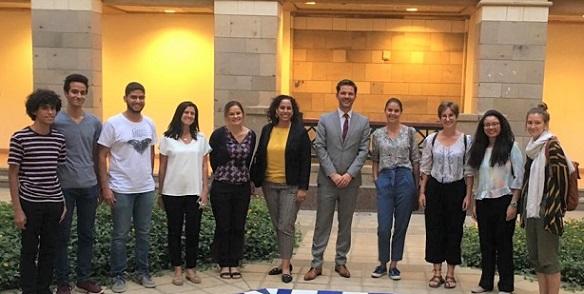 Since 2010 more than 40 students have benefitted from the student exchange program or the Erasmus mobility program and participated in this life changing experience. This feedback was also confirmed by the group of students that Mr. Krach met during his visit to the AUC: This group consisted of FU Berlin students that are currently attending a semester at the AUC as well as Egyptian students that have been attending a semester recently at FU Berlin. In an interesting discussion with the students state secretary Krach was informed about the parallels and differences between the German and American higher education system. Both student groups agreed on one thing: the stay abroad does not only include academic advantages but it also helps to overcome certain prejudices against the country through direct contact with the local students.

As a conclusion to the visit in Cairo, the state secretary confirmed that the level of cooperation with Egyptian universities shall be discussed among the Berlin universities to see to what extent the cooperation can intensified on the various possible levels.