The Ultimate Portraiture: God in Paradise Lost and in The Divine Comedy 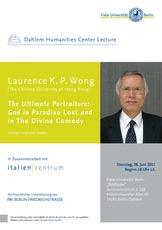 Arguably the two greatest poets in the Christian world, Milton and Dante have both written about God, respectively in Paradise Lost and in The Divine Comedy. Though equally influenced by the Bible and Christian thought and sharing many affinities, the two poets adopted different approaches in portraying the Supreme Being, a task that taxes the imaginative powers of the greatest of poets. While Milton’s portraiture of God is highly anthropomorphic, reminding one very much of the epics of pre-Christian times, that of Dante parts company with the classical poets in a direction totally of his own, owing little of its success to anthropomorphism. In the end, while Milton’s God is more interesting, more intriguing, and more “story-worthy” as a character, Dante’s comes closer to the true image of the Supreme Being. This lecture discusses God as he appears in Paradise Lost and in The Divine Comedy, compares the two poets’ approaches with reference to Homer, Virgil, Goethe, and Chinese mythology, shows how, eventually, Dante turns out to be the greater master in representing the ineffable, the indescribable, and the inapprehensible.