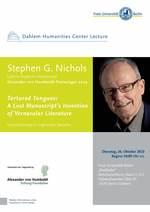 Around 850 C.E., a manuscript began to take shape in a Flemish monastery. Before it was finished, this codex would encompass religious thought, history, and poetry from Asia Minor, to Islamic Spain, and north to Charlemagne’s country. It would witness the formative influence of Eastern Mediterranean religious thought and the rhetorical finesse that assured its dominance on the Latin West.  It would testify to the spread of ineffable spirituality from East to West, and it would bequeath to posterity the earliest extant example of Old French poetry and one of the earliest Old High German heroic songs.