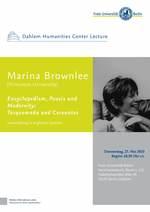 Encyclopedism is a staple of poesis in any period that perceives itself as modern.  Given that “modernity” involves intellectual thresholds exceeding what has come before, it is not surprising that such times seek to document the breadth and newness of their “thought experiments.” The task of philosophers and scientists at such times is to determine just How to identify what is true from what is false. Epistemology is the focus, and encyclopedic projects enable this process of rethinking ideas and institutions by the documentation of such progress in understanding.  Living in an age of intellectual revisionism, Torquemada’s influential Jardín de flores curiosas explores the frontiers of knowledge and belief—political, religious, and scientific—in a way that will inform Cervantes’s Persiles.